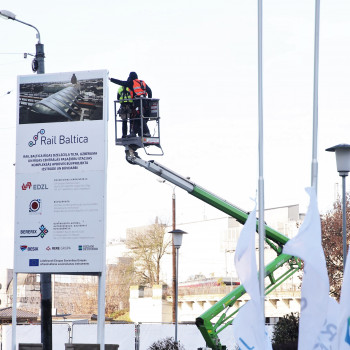 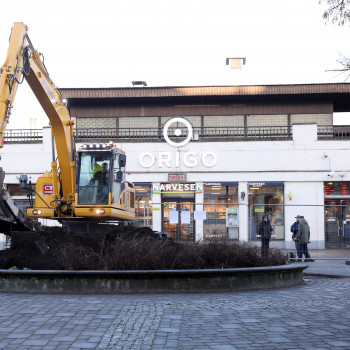 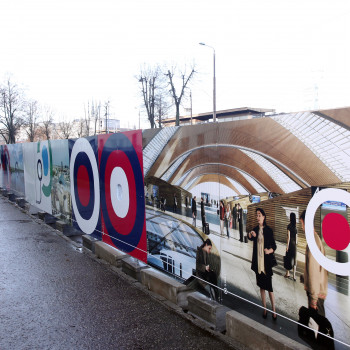 The residents of Latvia and Riga, as well as the builders and project implementers, were also remotely addressed by the European Commissioner for Transport Adina Ioana Vălean, Latvian Prime Minister Krišjānis Kariņš, the Minister for Transport Tālis Linkaits and Mayor of Riga Mārtiņš Staķis.

“This day is a milestone in European integration history. A modern state-of-the-art railway that will bring us closer together. Rail Baltica has always been a priority for the European Commission – it is one of our critical infrastructure projects, completing our core transport network along the TEN-T. This massive project will bring in new businesses, attract start-ups, create new jobs and new opportunities, and improve citizens’ living standards. I congratulate you that despite global pandemic you found a way not to hold back on this project’s constructional phase in a safe and secure manner,” says the EU Commissioner Adina Ioana Vălean.

“Rail Baltica is the largest infrastructure project, not only in the Baltic region but throughout the European Union. The importance of it has only increased in the context of the Covid-19 pandemic. This project is of strategic and geopolitical importance: it will connect our economy to the European Union’s single market, increase our international competitiveness and also the security of the region. It should be acknowledged that the Rail Baltica project is also one of the most complex in terms of its scale and technical solutions Latvia has been involved in after the regaining of its national independence. I would like to commend the ability of all the parties involved to come to an agreement in the name of a larger target, so that all would benefit from the opportunities provided by Rail Baltica, both for our economy and for the population,” Prime Minister Krišjānis Kariņš says in his congratulations to the project implementers.,” emphasises the Latvian Prime Minister Krišjānis Kariņš.

Tālis Linkaits, Minister for Transport: “We have started the implementation of this century’s biggest railway project so that the Baltic transport system could be part of the European network again. Rail Baltica will enable us to improve the Latvian public transport system that connects Baltic metropolises with the largest cities of Latvia, and ensure transport connections between Riga city centre and its suburbs. Rail Baltica trackwork is designed for both international and regional, as well as local trains, reaching speeds of up to 200 km/h. Rail Baltica loop to Riga International Airport will strengthen Riga’s central role in the Baltic aviation industry.”

Agnis Driksna, Chairman of the Management Board of RB Rail explains: ”With the beginning of works in Rīga Central Railway Station, we mark the beginning of construction works of Rail Baltica in Latvia. As of today, Rail Baltica construction works are taking place in all three Baltic States. As a result of the reconstruction of Riga Central Station and surrounding infrastructure, Latvia will gain new high-speed, environmentally friendly international and local railway services. Furthermore, the travel time between the capitals of the Baltic states will be reduced by half.

“The biggest project of the century has started, and it will be very significant not only for Riga but also for the entire Latvia. It is difficult to imagine another infrastructure solution that would change the capital city, transport system and daily habits of the residents of Riga so much, namely, our work, commuting and leisure activities. Hence, it is important that Rail Baltica is something more than just an infrastructure project — rather the result of joint efforts that creates a modern and pleasant environment for all commuters, road users and travelers. Let’s continue our active work by listening closely to all stakeholders and balancing their interests with the available resources. The next few years will be quite challenging both for the builders and the residents and visitors of the city, as well as for the local government. Besides, I’d like to emphasize that this is a time of opportunities also for entrepreneurs.  I wish the best of luck to the builders in their work and kindly ask the residents of Riga to be understanding and patient! Together we will succeed, and it will be admired by many generations to come!” Mārtiņš Staķis, the Chairman of Riga City Council.

The first construction works of Rail Baltica Central Hub in Riga will be performed on a building site located between the Riga Central Railway Station and the building of the Ministry of Transport, and along the railway line between Maskavas and Lāčplēša streets. Throughout the entire period of construction both the pedestrian and vehicular traffic arrangements around Riga Central Railway Station will remain uninterrupted and safe. Those who are interested in the process of construction may follow it on the website edzl.lv where an interactive real-time flowchart will be published. Information about the scheduled traffic restrictions will be available both on the website edzl.lv and the Global Project website info.railbaltica.org.

Kaspars Vingris, Chairman of the Management Board of Eiropas Dzelzceļa līnijas: “Investment in sustainable transport infrastructure these days is more important than ever. I am very pleased that on the occasion of our country’s 102nd anniversary which is celebrated in November we can now say that we have started construction work of the most significant project in Latvia’s centenary, namely, Rail Baltica. Not only implementation of Rail Baltica will boost the economy and help to recover from the Covid-19 pandemic crisis but also we are developing a convenient and modern railway infrastructure which will serve the Latvian economy in the longer term. At the same time it will be a significant contribution to the national economy as it will create lots of new jobs, as well as promote the development of other directly and indirectly related sectors.”

The first construction works of Rail Baltica Central Hub in Riga will be performed on a building site located between the Riga Central Railway Station and the building of the Ministry of Transport, and along the railway line between Maskavas and Lāčplēša streets. Throughout the entire period of construction both the pedestrian and vehicular traffic arrangements around Riga Central Railway Station will remain uninterrupted and safe. Those who are interested in the process of construction may follow it on the website edzl.lv where an interactive real-time flowchart will be published. Information about the scheduled traffic restrictions will be available both on the website edzl.lv and the Global Project website info.railbaltica.org.

The contracting authority of construction works is the Rail Baltica project implementer in Latvia, i.e. Eiropas Dzelzceļa līnijas (European Railway Lines). 81-85% of the project funding is provided by the EU’s Connecting Europe Facility and the rest is financed from Latvia’s state budget. The EU aid beneficiary and project implementer is the Ministry of Transport of the Republic of Latvia.