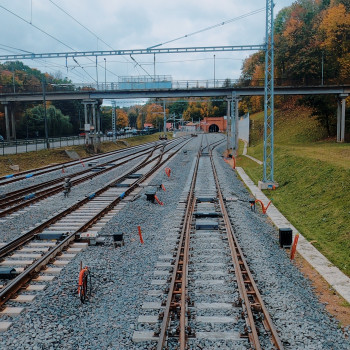 Only the concluding tasks remain for this stretch of the Kaunas railway node: building fencing, planting plants and completing the tunnel on Ugniakuras Street. When testing of the new railway is completed and it is submitted to a state commission, planning for cargo train routes will be launched.

According to LTG Infra director general Karolis Sankovski, the railway section between Kaunas train station and Palemonas is one of the most important in the entire Rail Baltica project.

“The main task of the project has been completed in line with a strict contracting schedule, as the Kaunas Intermodal Terminal (KIT) has been directly linked to European rail infrastructure. From now on, KIT will be the Easternmost point of the European rail network, which can soon be reached by freight trains via European standard gauge rail. The completion of works on this stretch will allow us to continue successfully developing this project toward Latvia and Estonia,” he says.

The modernisation work on Kaunas railway node, adapting it to the Rail Baltica requirements, was launched in spring 2019. During the modernisation project, European standard gauge railway was laid down through Kaunas to Palemonas, the historical Kaunas railway tunnel was modernised, four tunnels were constructed which will allow safe railway crossing for cars and pedestrians, city infrastructure close to the railway was reconstructed, and extra noise protection solutions were installed.

The reconstruction of the section Jiesia-Kaunas was completed in August 2015, and Jiesia-Rokai in October 2018. Construction work on the Rokai-Palemonas section is due to start in 2024.

According to K. Sankovski, with construction work completed, Kaunas railway node will become one of the most modern railway nodes, with a majority of all freight trains travelling down the Rail Baltica line passing through it.